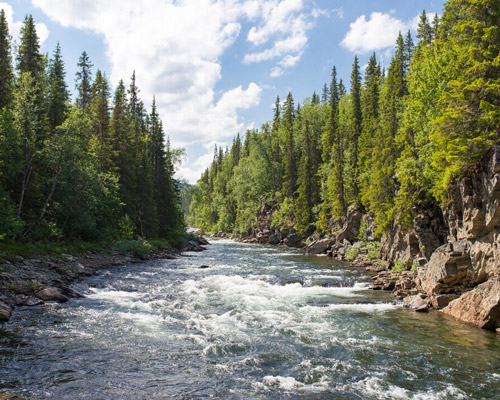 Freshwater accounts for less than 3% of all the water available on earth. More than half of this freshwater is perennially frozen, and some is groundwater in the form of aquifers. So, only about 0.5% of all water is available for humans and other species as surface freshwater. However, freshwater ecosystems have been hit the hardest by human activities, despite our vast dependence on it.

What is the Freshwater ecosystem?

Freshwater ecosystems are a subset of the earth’s aquatic ecosystems. Freshwater starts out as water vapor that has evaporated from the surface of oceans, lakes, and other water bodies. Water vapor leaves salt and other contaminants behind and becomes “fresh”, falling back to the ground as precipitation and from where it flows back to watersheds. Freshwater ecosystem consists of biotic and abiotic components such as plants, microbes, animals, rock, soil, sunlight and water.[MJ2]  According to the Food and Agriculture Organization (FAO), there are three types of freshwater ecosystems – Rivers, Lakes and Wetlands.

Why are freshwater ecosystems important?

Freshwater ecosystems are the only sources of drinking water for many species including humans. The World Bank reports that 2.2 billion people around the world do not have access to safe drinking water services. Freshwater supports the economy across agriculture, fisheries and forestry, energy, manufacturing and transport. According to the United Nations World Water Development Report 2016: more than 40% of the global workforce is dependent on freshwater. Water being a vital factor of production, diminishing supplies could translate into economic growth rate decline by as much as 6% of GDP by 2050. Thus, it is important to protect freshwater sources to meet the drinking needs of the future populations and economies. Freshwater enables ecosystem services such as nutrient recycling, natural filtration, buffer for floods & erosion, and recreation & tourism. The freshwater ecosystem provides critical habitats for a large number of aquatic flora and fauna  supporting more than 10% of all recorded species including ∼30% of all vertebrates.

Damage done to the freshwater ecosystem

According to the WWF’s Planet Index, freshwater species have declined by 83% since 1970, with one in three species threatened with extinction. The ecosystem does have natural assimilation processes and coping mechanisms, however, when the anthropogenic changes are too fast-paced, the ability to bounce back to the original state is lost. Freshwater ecosystems face challenges including pollution from chemicals, plastics and sewage, over-extraction for irrigation, power generation and domestic uses, as well as overfishing. Rivers face additional impacts from dams, canalisation and mining for sand and gravel. Wetlands are being drained for agriculture, with some 87% lost globally in the last 300 years, and more than 50 per cent since 1900. The IPBES report on Biodiversity and Ecosystem Services has ranked five key drivers for freshwater ecosystem decline and biodiversity loss in the order of most crucial to least as – (1) changes in land use; (2) direct exploitation of organisms; (3) climate change; (4) pollution and (5) invasive alien species.

Restoration measures for the freshwater ecosystem

Protecting or restoring freshwater ecosystems can mean improving water quality, monitoring and altering the land use around these ecosystems and avoiding or reversing human interventions to the natural processes. Few measures that are crucial for freshwater restoration are:

–       Access: Creation of easy access points for animals to drink, boats to land and humans to fetch water in order to reduce erosion. These measures when adopted with community involvement could secure the vegetation and fish spawning grounds from human intervention.

–      River flow: Removal of dams that are no longer serving their original intended purpose to reinstate the primal flow of rivers. For example, Yecla de Yeltes Dam in western Spain was demolished in 2018 to restore the Huebra river under EU’s Water Framework Directive.

–       Water quality: Reduction and treatment of wastewater and effluent to stop polluted water from entering the water streams.

–       Habitat: Insects are the main source of food for many fish. Plantation of indigenous plants along the banks enables creation of a suitable habitat for insects thereby  positively impacting fish population.

–       Fish Passage: Building fish corridors or fishways for easy movement of fish and other species to facilitate their movement.

Freshwater ecosystems are one of the rarest, yet most exploited environmental resources. The loss of freshwater biodiversity and degradation of ecosystems are not irreversible. Practices to reduce human interference in all forms – physical, mechanical and chemical would be required to return these  ecosystems back to their natural processes. The process begins with public recognition of the values of these ecosystems to people and the economic benefits of managing them more wisely.