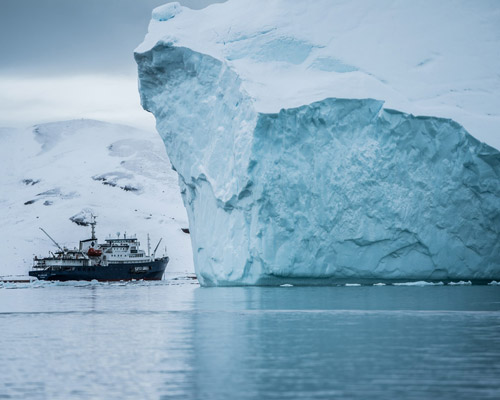 The polar region takes into account the Arctic region around the North Pole and the Antarctic region around the South Pole. While both regions are covered in sea ice or ice sheets and have severely cold climate conditions, they have distinct features due to their locations. The Antarctic region is surrounded by oceans and much colder than the Arctic region, whose relatively larger land surrounding helps it absorb and retain heat. Both regions have seen temperatures rise gradually over the decades and then sharply over the last few years, due to anthropogenic activities and associated rising greenhouse gases (GHG) levels.

What are the Polar Ecosystems?

Arctic region is defined as the area within the Arctic circle comprising of the Arctic Ocean basin and the northern parts of Scandinavia, Russia, Canada, Greenland, and the U.S. state of Alaska. It is almost entirely covered by water, much of which is frozen in the form of glaciers, icebergs, ice shelves and sea ice. The region is home to over 21,000 species including mammals, birds, fish invertebrates, plants and fungi. Vegetation exists in the form of the vast Arctic tundra and the Taiga. The Arctic also has rich human diversity, housing multiple distinct indigenous groups such as the Inuit, Aleut, Skolt Sámi, Chukchi, Yakut and others who form a tenth of the four million population in the region today.

The Antarctic region lies concentrically around the South Pole covering about 20% of the Southern Hemisphere and is characterized by its extremely cold and dry weather. There are no countries in the Antarctica region, although seven nations (New Zealand, Australia, France, Norway, UK, Chile, and Argentina) claim different parts of it. Its terrain is made up of glaciers, ice shelves and icebergs with only 1% of its terrain being ice-free. Antarctica is the world’s highest, driest, windiest and coldest continent and has no vegetation except lichens, mosses and algae. Most terrestrial life form is concentrated near the coast, housing about 18 species of Penguins, 15 species of whales & seals, and various other kinds of birds. 88% of species in the Antarctic Ocean are found nowhere else in the world. Antarctica has no permanent or native human habitation other than human settlements established for research and expedition purposes.

Why are the Polar Ecosystems important?

Both the Arctic and the Antarctic region helps immensely in climate regulation through the albedo effect, where the bright sea ice and ice sheets act as a mirror and reflect back over 80% of the sunlight, which otherwise would have been absorbed by the dark surface of the ocean. The sea ice affects and regulates ocean currents and temperatures around the world, as also the exchange of heat, moisture and salinity in the polar oceans.

Given its species richness and sparse human population, the Arctic region is one of the last in the world to remain in a wild state. The region stores enormous amounts of carbon and methane in the form of permafrost deposits, due to restricted microbial decomposition, which in turn is due to the extremely cold conditions over millennia. Permafrost plays an essential role in the Arctic ecosystem by making the ground watertight and maintaining the vast network of wetlands and lakes across the Arctic tundra that provide habitat for flora and fauna.

The waters surrounding Antarctica are a key part of the “ocean conveyor belt”, a global circulation system in which water moves around the globe based on density and on currents. The Antarctic Bottom Water, a mass of water formed in the Antarctic continental shelf causes warmer waters to rise, or upwell. The strength of this upwelling helps water move around the entire planet, in the absence of which the Earth’s water currents would not circulate in a balanced and efficient manner.

Damage done to the Polar Ecosystems

The warming of polar environments is happening twice or thrice as fast as the rest of the world, resulting in a rapidly shrinking permanent ice-cover. Ice-albedo feedback being a very strong positive feedback, melting sea ice  leads to a loss of albedo, increasing the amount of incident radiation absorbed, and exacerbates the loss of ice. Polar region warming, besides changes in animal habitat and migration patterns, also presents an opportunity for foreign species to enter the ecosystem, threatening species redistribution and survival of existing unique local species. Commercial ships travelling for trade and tourism are one of the biggest introducers of invasive species.

In a recent study, also the largest expedition ever to the north pole, scientists claim global warming might have already crossed an irreversible tipping point. The September 2020 Arctic sea ice extent was 900,000 sqmi. less than the historical 1981–2010 average for that month — almost 70% of the size of India. In fact, all months have shown a negative trend in sea ice extent over the past several decades. Drilling and mining are being actively pursued, with the region estimated to hold 30% and 70% of the world’s undiscovered natural gas reserves oil respectively. Melting sea ice is opening up the Arctic for high-risk shipping and fossil fuel extraction, leading to pollution and human-wildlife conflict.

Temperatures in the Antarctic region have risen by 3°C, leading to the retreat of once-stable ice shelves. Since the 1950s this is a loss of 25,000 km2 of ice shelf, which is near about the size of Rwanda! The Antarctic recorded an all-time high temperature of 18.3°C in February 2020. Climate change is also threatening the Antarctic Krill, which forms the lower layer of the food chain and is the key diet for penguins, whales, and seals. Antarctica has also witnessed a boom in the number of visiting tourists (numbering about 56,000 in 2018-19 alone), which brings in the threat of oil spills and disruption to local wildlife.

Restoration measures for the Polar ecosystem

Polar ecosystems are arguably, the most sensitive environments on the planet to climate change. Reducing emissions around the world is the key to control global warming, and in turn, decelerate melting of the ice caps and preserve local food chains. Scientists project that if emissions continue to rise unchecked, the Arctic could be ice-free in the summer by 2040, as ocean and air temperatures continue to rise rapidly. Some of the other thematic restoration measures in place are:

The Polar ecosystems are ‘poles apart’ in their geography, as they are similar in terms of the impact they have on the earth’s climate and global warming. Immediate efforts to curb emissions along with restricting global trade and external human interference are key to ensure the polar ecosystems remain pristine and healthy. Having governed and preserved ecosystems for millennia, efforts of the indigenous peoples in partnership with scientists are critical to restoration.