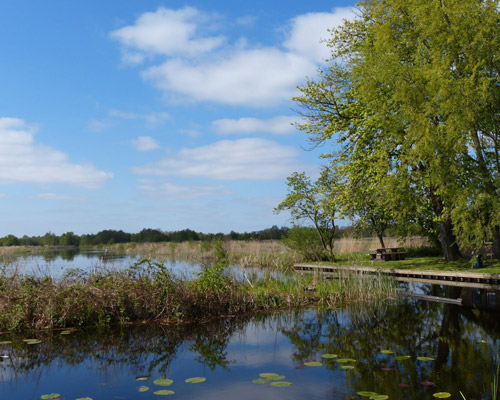 The planet has 7-9 million sq. km of wetlands, forming around 5% of its total land surface and spread throughout the world except Antarctica. In India, around 5% of the geographical area are wetlands with a total of 757,060 been mapped. Wetlands around the world support biologically diverse species and communities, thereby having immense ecological and economic value. Though among the most ubiquitous ecosystems and having a confluence with humans, wetlands are quite overlooked in terms of their importance.

What is the wetland ecosystem?

A wetland is an area of land that is either covered or saturated with water permanently or seasonally. The source of water is often groundwater, seeping up from an aquifer or spring, though it can also come from a nearby river, lake or coastal areas experiencing strong tides. The functions of a wetland and its derived values to humans depend on a complex set of relationships, discussed later in the article. They exist in every country and climatic zone, from the polar regions to the tropics, and from high altitudes to dry regions. Wetlands also go by various other nomenclatures – swamps, peatlands, sloughs, marshes, muskegs, bogs, fens, potholes, and mires. However, the four major kinds of wetlands mapped by scientists are: swamps, marshes, bogs, and fens.

Why are wetland ecosystems important?

Wetlands are home to a large diversity of species and provide significant economic, social and cultural benefits related to timber, fisheries, hunting, recreational & tourist activities, etc. They also provide a wide array of ecosystem services such as water quality preservation, shore protection from wave action and nurseries for fish & other aquatic animals. Wetlands are critical to groundwater recharge, carbon sequestration, maintenance of atmospheric water cycles and reduced damages from storms and flooding.

The combination of shallow water, high nutrient levels and primary productivity are ideal for the development of organisms that form the base of the food web as well as those who feed on various species of fish, amphibians, shellfish and insects. Many species of birds and mammals rely on wetlands for food, water and shelter, especially during migration and breeding seasons. Wetlands’ microbes, flora and fauna are part of global cycles for water, nitrogen and sulfur. Peatlands represent half of the Earth’s wetland and come in all mentioned forms of wetlands. They form the largest natural terrestrial carbon store on earth!

Damage done to the wetland ecosystem

Many wetlands across the world have undergone significant degradation with negative impacts on biological diversity and livelihood of communities. Most of them are considered at risk due to damming, fishing, farming, oil exploitation, agriculture and forestry. The world has lost around 87% of natural wetlands since the 1700s and 35% have disappeared since the 1970s. India has lost nearly one-third of natural wetlands to urbanization, agricultural expansion and pollution over the last four decades.  Destroying or degrading wetlands can lead to increased flooding, loss of biodiversity, and decline in water quality. Wetlands are threatened by reclamation and degradation of land, pollution, hydrological alteration, and over-exploitation of natural resources resulting in the disruption of ecosystem services provided by them. When compared, it is estimated that wetlands are vanishing three times faster than forests and their rate of disappearance is increasing.

Restoration measures for the wetland ecosystem

India is a party to the Ramsar Convention, an intergovernmental treaty that provides the framework for national action and international cooperation for the conservation and wise use of wetlands and their resources. This convention has 170 nations as signatories which helps protect the most significant remaining wetlands, since it came to force in 1975. The diversity of wetland types means there are numerous methods for restoring wetlands.  The method adopted will depend on the habitat which is being restored. For example, in India, the Kole wetland in Kerala is popular for its paddy cultivation that dates back to 300 years and is one of India’s 42 Ramsar sites. The Kole wetland survives with human activity, as paddy cultivation maintains the ecosystem. According to experts, this human intervention coupled with ensuring natural succession in ownership has been important, without which the land would have got converted into a forest habitat. On a broader level, two types of approaches can be employed for wetland ecosystem restoration:

Effective policy and resource management need a good understanding of the drivers of change in wetlands so that the root causes of their loss and degradation can be addressed. Investment is essential from governments and the private sector, whereby wetlands are recognized for their role as an imperative natural infrastructure.