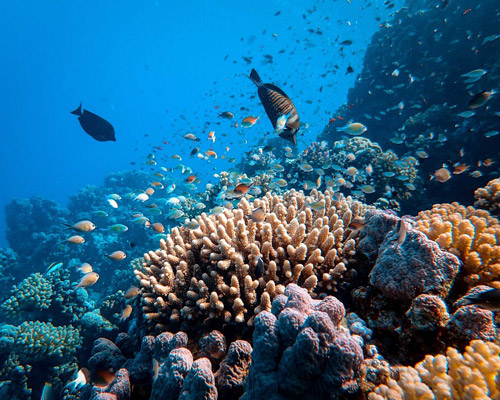 Around 71% of the Earth’s surface is water-covered, and the oceans hold about 96.5% of all Earth’s water. Oceans feed us, regulate our climate, and generate at least 50% of the oxygen we breathe. Yet the marine ecosystem is some of the most heavily exploited and subject to extreme stress from pollution throughout the world. The unsustainable nature of profit-led human activities is a threat to the remaining marine ecosystems and the services they provide.

What is the marine ecosystem?

Marine ecosystems are aquatic environments with high levels of dissolved salt, such as those found in or near the ocean. Marine ecosystem consists of biotic factors like plants, animals, and microbes; and abiotic factors including the amount of sunlight in the ecosystem, the amount of oxygen and nutrients dissolved in the water, proximity to land, depth of the water body, and temperature. Variations in characteristics of the marine environment influence different habitats for marine organisms and determine habitation patterns. The various types of marine ecosystems are: estuaries, salt marshes, mangrove forests, coral reefs, open ocean, the deep-sea ocean and the coastal marine ecosystems.

Why are marine ecosystems important?

The oceans and seas play a significant role in capturing heat and producing oxygen. According to the US National Oceanic and Atmospheric Administration- more than 90% of the global warming over the past 50 years has occurred in the oceans. Tiny plant-like organisms that live in the sea- Phytoplankton, consume carbon dioxide and produce oxygen as a byproduct. Every year, this process transfers approximately 10 gigatonnes of carbon from the atmosphere deep into the ocean helping in the moderation of our climate. Similarly, our coastlines provide livelihood options for millions of people in industries such as fishing, aquaculture and tourism. This forms the backbone of the ‘Blue Economy’, where the economic opportunities from ocean and marine ecosystems are valued at around 1.5 trillion dollars annually. The health of the oceans is strongly dependent upon its marine biodiversity and anthropogenic warming directly alter their feeding, development and breeding activities. Healthy marine ecosystems are important for society since they provide food security, raw materials for medicines, building materials like sand, and natural defenses against hazards such as coastal erosion and inundation.

Coastal ocean zones, which account for 4% of the earth’s total land area and 11% of the world’s oceans, are known to house more than a third of the world’s population and account for 90% of the catch from marine fisheries. According to a study reported in the Biology Today, 50% of salt marshes, 35% of mangroves, 30% of coral reefs, 29% of seagrasses, and almost 89% of oyster reefs have already been lost or degraded worldwide over several decades. Few of the reasons behind this damage are coastal development, population growth, pollution, and other anthropogenic activities. Overfishing has been a persistent problem in marine environments, and loss of fisheries is linked to declining water quality by increasing occurrence of harmful algal blooms, offshore pollution and oxygen depletion (hypoxia). Oceans have absorbed about 93% of the excess heat from greenhouse gas emissions since the 1970s which lead to rising ocean temperatures. Warming of the oceans have caused coral bleaching to sea level rise, resulting in entire marine ecosystems rapidly changing.

Restoration of marine ecosystems with a goal of 2050 requires sustained effort and financial support. Even a 50% ocean coverage for such protection measures will entail an estimated cost of at least $10 –20 billion per year. The economic return from this commitment is estimated to be ~10 times and paves the way for around a million new jobs. Few interventions that are imperative for marine ecosystem restoration are:

– Water quality improvement by regulating or phasing out hazardous pollutants prescribed by national and regional policies.

– Preventing plastic pollution from reaching the ocean systems by establishing checks on effluents discharged by municipalities and manufacturers.

– Restoration of vegetation above and below the water by driving efforts to protect and restore salt marshes, mangroves, coral reefs, sea-grass meadows and shellfish beds. This is essential to boost their diversity and the habitats for benefits they provide.

Around the world, efforts are under way to improve conservation and sustainable use of marine and coastal biodiversity thus helping prevent ecosystem degradation. The most effective solution to marine conservation can be found at the intersection of science, governance, responsible consumption and social justice.