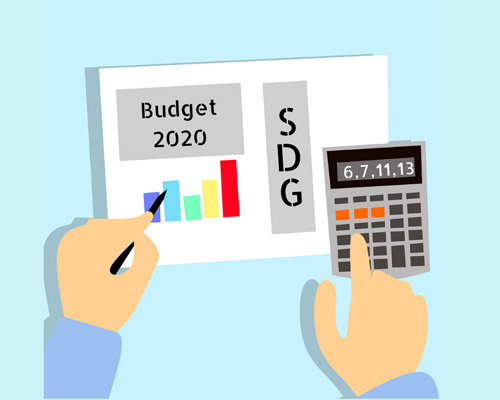 India is committed to achieving the UN Sustainable Development Goals (SDGs) by 2030. The national action on SDGs in India is currently led by the policy thinktank – NITI Aayog.

Envint takes a look at the Union Budget 2020 from the lens of climate SDGs and how the progress on these goals maybe impacted by budget measures. We take a look at four of the 17 SDGs that have a direct relation to climate, namely SDG 6 (Clean Water & Sanitation), SDG 7 (Clean & Affordable Energy), SDG 11 (Sustainable Cities & Communities) and SDG 13 (Climate Change). While the Budget mentions environment and sustainability being a pillar of its ‘caring society’ theme, it is at best a start, with a few ideas & schemes to back. With only a decade left to achieve the SDGs, much more efforts would be required as part of budgetary and non-budgetary interventions to make steady yearly progress.

Ensure availability and sustainable management of water and sanitation for all

Clean Drinking Water: The budget allocated a nominal INR 11,500 cr (USD 1.6 bn) for FY 2020-21 towards the Jal Jeevan Mission, the ambitious INR 3.6 lakh cr (USD 50 bn) program with an aim to provide 100% piped water supply connectivity by 2024. This year’s budget is a mere 5.5% of the total share of the Central Government, which proposes to fund approx. 60% of the total outlay. We had expected a much faster scale up to meet the laudable goal of JJM, on the lines of Swachh Bharat Mission (SBM), which had a much higher fund allocation in the initial years.

ODF to ODF+: SBM, the flagship program of NDA 1.0 targeted to end open defecation is being considered a success in meeting the intended objectives. Now, the FY 2020-21 budget aims to sustain this open defecation free (ODF) movement as part of the Govt.’s commitment towards ODF+, which has been launched to further tackle challenges like liquid, solid and biodegradable waste management along with faecal sludge management. The Govt. has rightly enhanced the budget amount towards the SBM by 17% as compared to last year with an allocation of INR 12,300 cr (USD 1.7 bn).

River cleaning: On river cleaning, there haven’t been any new announcements, and efforts are likely to focus only on continuing the Namami Gange program.  With a large part of the Central Govt’s share in the program remaining to be tendered (almost USD 2 bn), a provision of INR 800 cr (USD 115 mn) for the National Ganga Plan under the Namami Gange programme, seems abysmally low in meeting the original timelines. Even the allocation of INR 840 cr (USD 120 mn) for the National River Conservation Plan is approximately 40% lesser than previous year.

Ensure access to affordable, reliable, sustainable and modern energy for all

Modern & Sustainable energy infrastructure: The current budget allocated for the power and renewable energy sector is INR 22,000 crore (USD 3.1 bn). Renewable energy sector managed to get more attention in the budget as the allocation for MNRE is INR 5,753 cr (USD 810 mn), of which INR 700 cr (USD 100 mn) is allocated for KUSUM. This scheme aims to address SDGs by way of higher income for farmers, energy and water independence, and reduction in fossil fuels emissions by providing standalone solar agricultural pump to 2 million farmers. The government’s plan to use available land alongside railway tracks for building solar capacity, and electrifying 27,000 km of railway tracks by 2023 is a green turn towards decarbonizing the single largest consumer of electricity in India.

Increasing share of RE in energy mix: To further reduce the farmer’s dependence on fossil fuels, the budget aims to assist 1.5 million farmers in transitioning their existing  diesel & kerosene grid-connected pumps to solar power. For enhancing the economic productivity of the farmers, the budget also announced a scheme (yet to be operationalized) for setting up solar generation capacity on fallow & barren lands and then selling it to the grid.

The budget also has an unenforceable advisory to the utilities to shut down old thermal power plants with high carbon emissions. These are insufficient, yet important directional moves that can help India progress towards the target to ‘Integrate climate change measures into national policies, strategies and planning’. The positive impact on emissions would depend on the pace of implementation of these advisories by the utilities and state governments.

With air pollution becoming a serious topic of public discourse across urban India, the budget has targeted to tackle air pollution across cities with population over 1 million, by allocating INR 4,400 cr (USD 628 mn). The budget allocation has increased almost 10 times from the previous year’s allocation of INR 460 cr (USD 65.7 mn).

Take urgent action to combat climate change and its impacts

In terms of aligning India with targets of SDG 13, there have been a few hits and misses. While the National Action Plan on Climate Change (NAPCC) did not see any change in fund allocation from FY 2019-20, the National Adaptation Fund for Climate Change (NAFCC) which supports concrete adaptation activities aimed at building climate resilience in India saw a decline of 20% to INR 80 cr (USD 11 mn). A continual decline in new projects and monetary allocation by the central government over the past few years is likely to affect the ability of communities in altering the adverse effects from activities such as stubble burning or water scarcity.

The budget mentioned the formation of the Coalition for Disaster Resilient Infrastructure (CDRI) which aims to ‘Strengthen resilience and adaptive capacity to climate-related hazards and natural disasters in all countries’ and support in achieving the SDGs. There are no details however on the exact nature of plans or spending.

Climate change made a re-entry into the budget speech after a few years, with mention of India’s commitment to the Paris Agreement. The government has shown its inclination towards fulfilling India’s NDC targets with implementation beginning from January 2021. With the budget stating that, “commitments as action will be executed in various sectors by the Departments/Ministries concerned through the normal budgeting process”, it is expected that other ministries beyond new and renewable energy would now have linkages to these goals.

Sewage and its hidden value